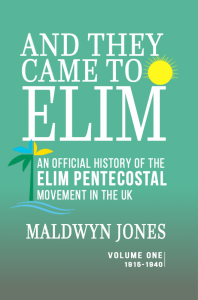 ‘Conveys the excitement and the miracles – as well as the troubles – that attended those formative years.’
William Kay, Professor of Theology at Glyndwr University

The Elim Pentecostal Church burst onto the national scene in the 1920s in a whirlwind of miraculous healings and tens of thousands of converts. Its founder, George Jeffreys, became a household name as he and his team toured the country, holding huge campaigns and planting hundreds of churches – a legacy that stands to this day, with 550 churches in the UK and Ireland, and thousands more around the world.

This complete history by Official Elim Historian, Maldwyn Jones, chronicles Elim’s story in three volumes, from 1915 to the present day. This first volume introduces George Jeffreys and other prominent leaders, exploring their roots in the Asuza Street and Welsh revivals, and the Sunderland and Keswick conventions. The Movement’s humble beginnings and rapid, evangelistic spread across the UK are charted, along with the accompanying demonstrations of the Spirit’s healing power that marked it out and were often highlighted by the national and local Press.

But why was the miraculous so common in Elim meetings? What was it that the founders believed that so many other Church leaders did not? To answer this, the author explores the ‘foursquare’ teaching that influenced the Elim leaders’ thinking, and how this transformed their lives and work. The foursquare teaching states that: Jesus is the Saviour, the Healer, the Baptiser in the Holy Spirit and the Coming King. For Jeffreys and the others, the active demonstration of the Holy Spirit’s power was not something that belonged only on the pages of the Bible, but rather was fundamental to preaching the gospel today.

Sensitive consideration is also given to the painful division that resulted in Jeffreys leaving Elim in 1940 to establish another denomination. This split, together with the outbreak of World War Two, had a devastating impact but, as the second volume will show, Elim’s work was far from done.

Author Maldwyn Jones comments, ‘The importance of this book lies in the fact that it is, together with the next two volumes, the first complete historical account of the birth and development of the Elim Pentecostal Church. I have sought to accurately portray the history of Elim from its commencement in Monaghan, Ireland, in 1915 through to its perilous position in 1940.

‘While the reader may be fascinated with the accounts of the rapid growth of the Movement in the twenties and thirties, I would also point out the remarkable early years of Elim in Northern Ireland where the Elim Evangelistic Band, consisting of women as well as men, worked under the leadership of George Jeffreys. It was this pattern of collegial workmanship that was to serve Elim well in the aftermath of the huge challenges that the Movement faced in the resignation of its founder and leader, together with the effects of the Second World War.’